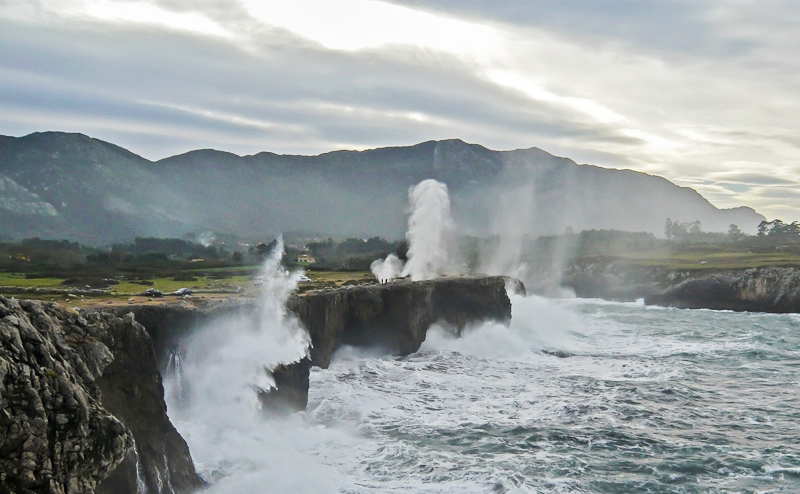 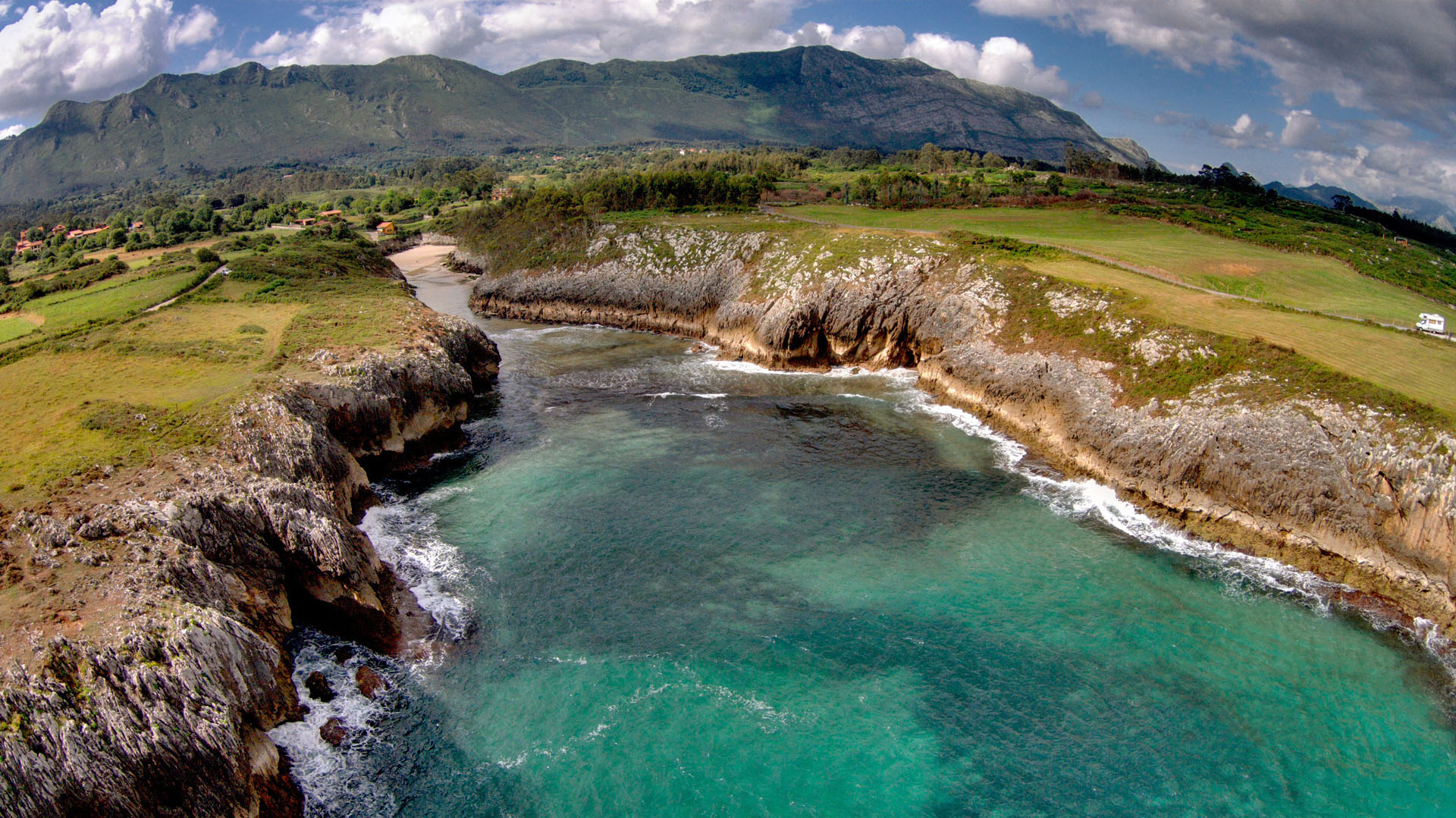 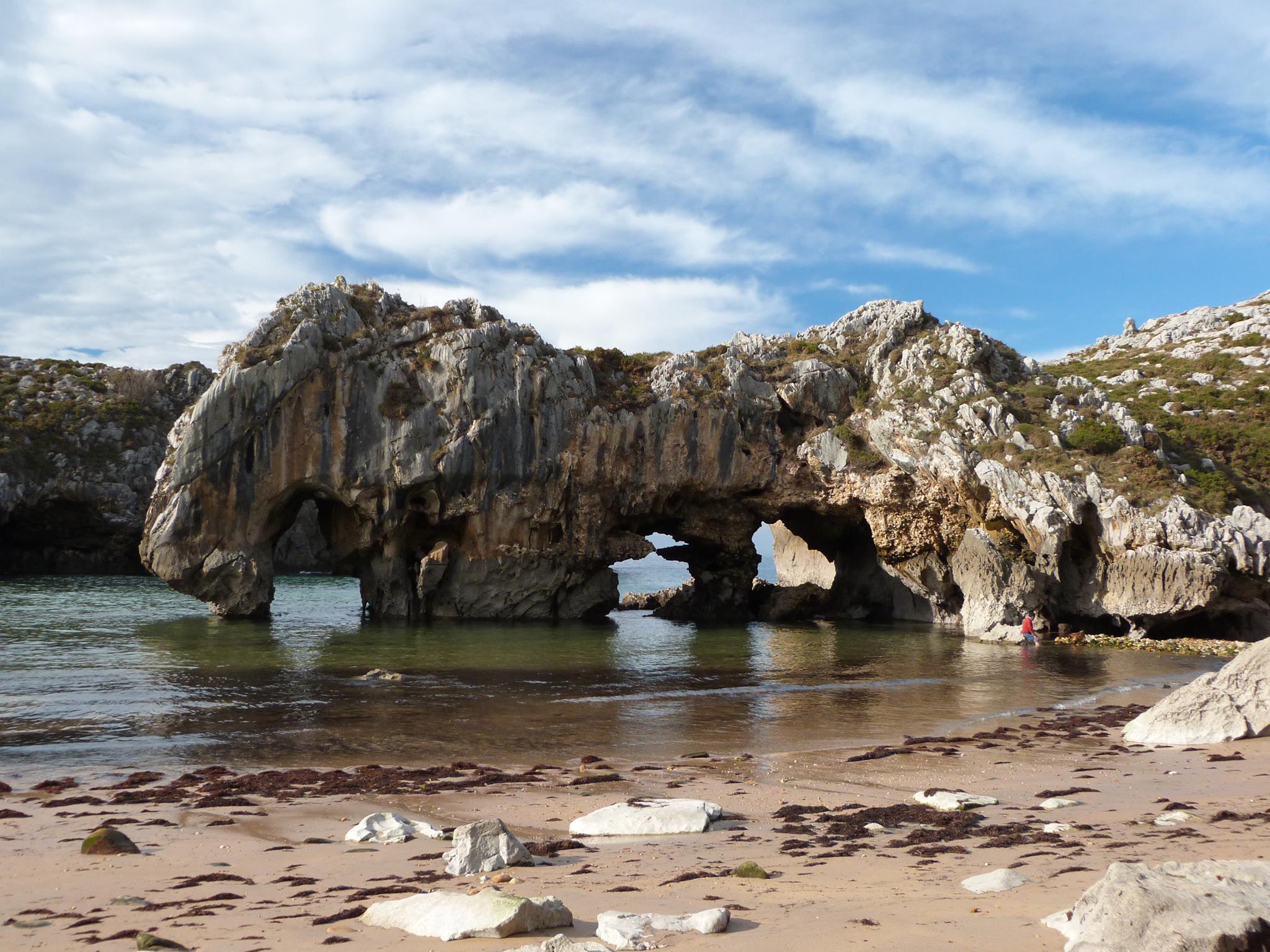 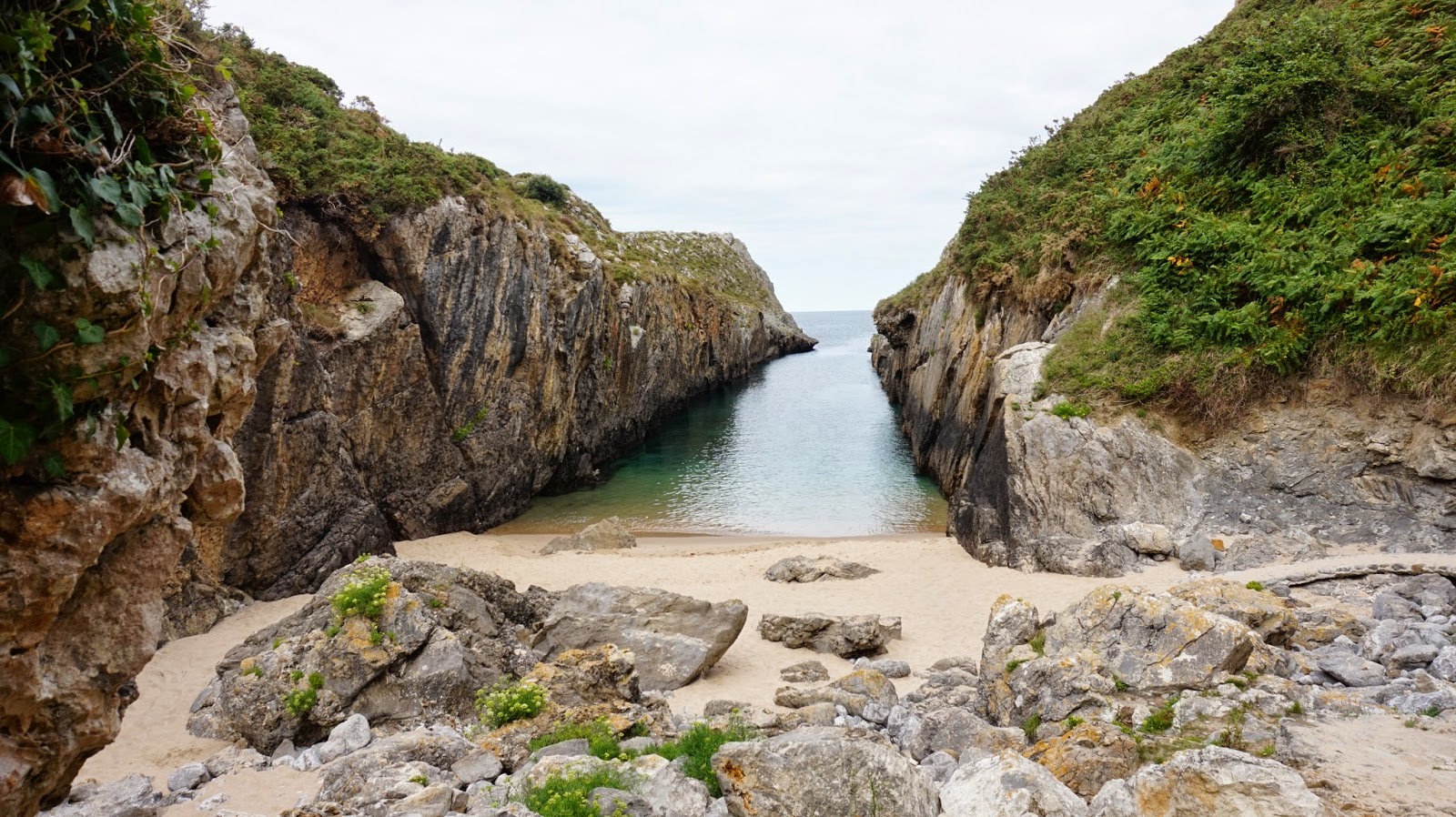 We are in an area where beaches abound; spectacular, natural retreats reached after a quiet walk through nature. The nearest is Guadamía Beach, 500 metres from our country houses. Guadamía is the westernmost beach in the council of Llanes and is located at the mouth of the river of the same name that marks the boundary between Llanes and Ribadesella. It is a beach of fine white sands with calm waters, ideal for swimming, and that is about 80 metres long. It is one of our nearest gems.

Canal Beach is also nearby and is a genuine monument to nature. It originated thanks to a strange geological formation that has excavated this beach into a canyon in the cliffs. The name says it all: it is a sandy canal that empties into the Bay of Biscay, a vertical beach. It is located in the town of Villanueva de Pría. Canal Beach is only 25 metres long but it is a wonder of nature that makes our district even more attractive.

Canal Beach is close to a “bufón” (water spout), another of nature's whims resulting from the interaction of the sea and the limestone rock, making this point of the Asturian coastline an unforgettable experience. The “bufones” and, more specifically, the “bufones” at Pría, attract thousands of people to this part of the Llanes coastline each year. “Bufones” have found a place in Wikipedia that defines them as a vertical hole that forms a few metres from the edge of a limestone cliff and that connects with the sea through galleries beneath the rocks.

When the tide rises and the waves pound the shore, a jet of sea spray shoots up through the hole causing a characteristic hissing sound. The column of sea spray can reach heights of 10 metres and the hissing noise can be heard several kilometres away.

A little further away, just under half an hour walking and 5 minutes by car, is Cuevas del Mar Beach; another natural monument of our landscape. It is a protected monument and an example of how the rock can be excavated by the action of the sea.

From this beach, we can walk to San Antonio Beach, one of the most secluded in the area and that can only be reached on foot. The charm and the mystery of this area is enhanced by the secluded chapel of San Antonio, located on the cliffs, almost hidden from sight and only accessible on foot, where the ancestors of the Earl of Vega del Sella are buried.

These are the beaches that can be found nearby, however, there are many more on the Llanes coastline. A short 30-minute drive will take you to the attractive and well-known beaches of San Antolín, Torimbia, Barro, Borizu, Palombina, Cué, El Sablón, La Ballota, Andrín...; beaches offering a wide range of features: secluded, open, large and small, urban, overlooked by towering cliffs or at the end of paths along which you must walk in single file.

The council of Llanes and the surrounding area are noted for being the centre of numerous activities. It could be said that they never rest. From January to December, it is rare to find a village or town in eastern Asturias that does not have a saint to worship. The list is too long to include here, although we must mention the Virgen del Carmen celebrations in many towns in the area. This sea-faring Virgin is honoured in processions in many streets in Llanes and also in San Roque, La Blanca, La Guía, Santa Ana and San Antolín.

The “ramu y la joguera” are two typical elements of festivities in the east of Asturias that are worth discovering. There is a lot to choose from all year round, although there are more and better festivities in summer. A quarter of an hour from Llanes, in Ribadesella, the most famous canoeing race in the world is held on the first weekend of August each year: the International Descent of the Sella River or the “canoeing party” as it is popularly known in Asturias gathers tens of thousands of people each summer.

Between the sea and the mountains, separated by only a dozen kilometres, the area where our country houses are located offers a wide range of sporting opportunities for all ages and physical conditions. Hiking, for example. The east of Asturias features a variety of trekking routes through incomparable landscapes.

Sports that involve water, such as surfing or canoeing in rivers, have become increasingly popular in recent years and our beaches and rivers provide ideal conditions to practice them. And, of course, golf; another of the sports that completes the attractiveness of eastern Asturias for tourists.

Our district has a long history marked by its seafaring tradition, agricultural produce and the influence of generations of “indianos”, people who made their fortune in America and then returned to their homeland with the wealth that enabled them to build these large houses overlooked by the ubiquitous palm trees as a souvenir from the years they spent in America. Therefore, a visit to Llanes and to much of eastern Asturias implies exploring this human influence, a legacy of the generations devoted to all these activities.

One of the most striking elements of the council of Llanes, although also one of the more recent, is clearly the “Cubos de la Memoria”, a work of art by the Basque artist Agustín Ibarrola that has transformed the breakwater of the port of Llanes into an icon of colour that is visited by thousands of people each year. This is another of the cultural elements that nobody travelling through this part of Asturias should miss.

Eastern Asturias features perhaps one of the greatest concentrations of beauty and landscapes that justify the title of Natural Paradise that Asturias includes in its tourist slogan. Within a short distance of our houses and apartments, we have the inland valleys of Llanes that lead up to the Cuera Mountains, a splendid vantage point from where one can admire the coastline and marvel at the peaks of the Europa Mountain Range,

a labyrinth of summits and routes where mountain climbing enthusiasts will find the enjoyment they are seeking. Further west, we have the Sueve Mountains, home to some of the most spectacular beech forests in Asturias that are also close to the Dinosaur Route. The Sella and Deva rivers are another two potential and admirable destinations in the midst of nature.